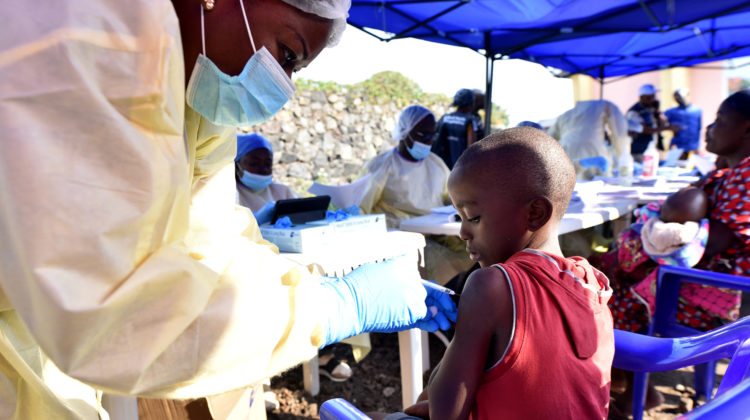 It’s the first official statement from the White House on the reemergence of Ebola in the two African countries. Psaki said President Joe Biden has been briefed on the situations in Central and West Africa.

“While the world is reeling from the ongoing COVID-19 pandemic, Ebola has again emerged, simultaneously, in both Central and West Africa. The world cannot afford to turn the other way,” Psaki said. “We must do everything in our power to respond quickly, effectively, and with commensurate resources to stop these outbreaks before they become largescale epidemics.”

The World Health Organization announced last week that it had confirmed new cases of Ebola in Butembo, a city in North Kivu Province in the DRC. The city was an epicenter of the second-largest Ebola outbreak in the world that was declared over in June. WHO officials said Friday it was transporting vaccine to the hard-to-reach city and racing to contain the highly lethal disease before it spreads widely.

Separately, officials in Guinea confirmed over the weekend the reemergence of Ebola in N’Zerekore, in southern Guinea. On Sunday, after at least three people died and four others were infected with the disease, the West African nation declared an Ebola epidemic. Neighboring countries Sierra Leone and Liberia have put their citizens on high alert.

Unlike the highly infectious coronavirus, which can be spread by people who don’t have symptoms, Ebola is thought to mainly spread through people who are already visibly sick. The virus spreads through direct contact with the blood or body fluids of people who are sick or who died of the disease, according to the U.S. Centers for Disease Control and Prevention.

Ebola has an average case fatality rate of 50%, though it can vary by outbreak, according to the WHO.

Psaki said U.S. National Security Advisor Jake Sullivan on Tuesday spoke with the ambassadors of Guinea, the DRC, Sierra Leone and Liberia “to convey the United States’ willingness to work closely” with those countries.

The reemergence of Ebola in Guinea and the DRC has global health specialists particularly concerned because those countries are home to the two worst Ebola outbreaks in history. The outbreak in the DRC that was declared over in June lasted for nearly two years. It was the second-largest in the world and by the time it ended there were 3,481 total cases and 2,299 deaths, according to the WHO.

The infamous West Africa Ebola outbreak began in Guinea in 2014 before spreading across land borders to Sierra Leone and Liberia, according to the WHO. By its end in 2016, there were more than 28,000 cases, including over 11,000 deaths, WHO says.

“Since the 2014 Ebola epidemic in West Africa, the United States has endeavored to elevate and prioritize health security assistance with partners through the Global Health Security Agenda and with strong support from Congress,” Psaki added Tuesday. “We cannot afford to take our foot off the gas – even as we battle COVID, we must ensure capacity and financing for health security worldwide.”

During the West Africa Ebola outbreak, the U.S. Centers for Disease Control confirmed 11 cases of Ebola in the U.S., mostly among medical workers who had traveled to Africa to assist with the response. Dr. Syra Madad, senior director of the systemwide special pathogens program at New York City Health + Hospitals, told CNBC on Tuesday that the city is working to ensure its outbreak-response protocols are up-to-date.

“Anytime we see an epidemic declared, at least in New York City, we know we’re a travel hub, we need to make sure that our staff are up to date on competencies when it comes to PPE and identifying these patients,” she said in a phone interview. “There’s a big scramble just to make sure that the concept of operations plan is dusted off.”

After ‘The Voice’ and BET, two Mississippians give one last concert before heading to L.A. Published 6:45 am Monday, January 30, 2023 … END_OF_DOCUMENT_TOKEN_TO_BE_REPLACED